Barcelona Cathedral: Detail, exterior buttressing, the portal of Saint Iu and base of the bell tower 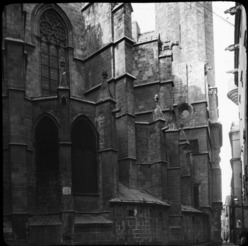 An outstanding example of Early Gothic architecture in Catalonia, Barcelona Cathedral was built during the height of the city’s prosperity. The present building is the third church on the site; the remains of the first, a Constantinian basilica of 559 AD (destroyed by the Moors in the 10th century), are still visible in a gallery 4 m below street level. The Saint Iu portal and part of the north transept survive from the second basilica of 1058. The first stone of the new cathedral was laid in 1298. The new cathedral was built to house the relics of St. Eulalia. The neo-Gothic west facade was added in 1887-1890 by Mestres Esplugas.