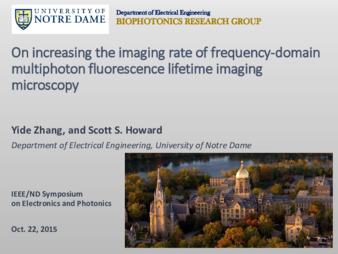 Multiphoton microscopy combined with fluorescence lifetime imaging microscopy (MPM-FLIM) is a technique that allows for imaging the lifetime of fluorescence created by two-photon excitation. It not only possesses the advantages of MPM such as large imaging depth, but also the strengths of FLIM including the ability to discriminate different fluorophores with similar emission spectra. In FLIM, the frequency-domain (FD) method, which relies on periodic intensity-modulated excitation light and its response to obtain lifetimes, is most commonly used for living animal imaging. The imaging rate of a FD-MPM-FLIM imaging system, however, is limited by the signal-to-noise ratio (SNR) of the lifetime measurement. In this study, we show that the DC and higher harmonic components generated by nonlinear optical mixing of the excitation light can be exploited to improve the SNR of FD-FLIM, reducing the required number of photons, thus increasing the imaging rate, by 50%. Another approach called frequency-multiplexed MPM-PLIM can drastically increase the imaging rate by modulating the excitation light at a number of different fundamental frequencies, instead of a single one. The imaging rate, therefore, can be increased by up to a factor of 100. The modulation frequencies, however, should be within a single octave to avoid crosstalk between the fundamental and second-harmonic terms, which puts a limit to further increasing the imaging rate. In this study, we propose that by changing the excitation light’s waveform from sinusoid to square-root of sinusoid, the crosstalk between the fundamental and second-harmonic signals can be neutralized. Thus the limit on the frequency-multiplexing can be alleviated to further increase the imaging rate. Overall, the imaging rate of FD-MPM-FLIM can be 4 times as fast as that of conventional one-photon FD-FLIM by exploiting DC and harmonics components, and the rate can be increased by more than a 100 times using the improved frequency-multiplexing technique.