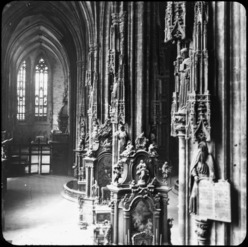 There are 18 altars in the main part of the church, and more in the various chapels.

From the time of its foundation in the 12th century, the Stephanskirche, which became a cathedral (Stephansdom) in 1469, played an important role in church politics. Of the Romanesque parish church only the west towers, the west portal (the so-called Riesentor) and west gallery remain, but the Gothic structure is one of the most remarkable examples of a hall church. Its south tower, the Stephansturm (‘Steffel’), was the tallest spire (h. 137 m) in German-speaking Europe on completion in 1433. St. Stephen’s is also known for its ornately patterned, richly coloured roof, 111 meters (361 ft) long, and covered by 230,000 glazed tiles.