Ávila Cathedral: Exterior detail, west portal and missing tower of the facade; to the left is a mechanical clock by Guas 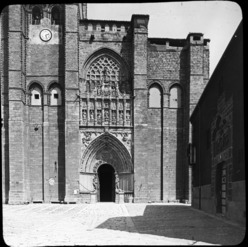 The sculpture was moved from the west façade and reset above a flattened arch by Juan Guas, who came from Toledo in 1459, early in his career, to execute a new west portal, of which the huge wild men now flanking the doorway formed part. The façade was redesigned by Ceferino Enríquez de la Serna (1779-1786).

Building began with the five ambulatory chapels enclosed by the semicircular wall that formed part of the city ramparts. The design draws on Burgundian sources, but it also shows a wider awareness of Early Gothic experiments in northern France. The double ambulatory with slender columns is derived from Saint-Denis Abbey and other Ile-de-France buildings. In the 13th century a sacristy with a complex rib vault, a chapter house with eight-part vault and squinches and a cloister were added, but construction slowed in the nave. Juan Guas was commissioned for a chapel in the cloister in 1471, and Martín de Solórzano designed the library (Capilla del Cardenal) in 1495. Other Renaissance work was done up to 1603.