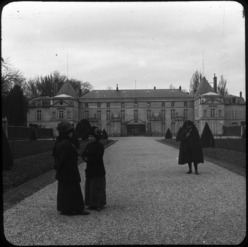 Originally built by Christophe Perrot in 1622. It was formerly the residence of Joséphine de Beauharnais, (later the Empress) and with the Tuileries, was from 1800 to 1802 the headquarters of the French government. It is the most complete expression of the Consulate style, and owed more perhaps to the taste of Empress Josephine than to Napoleon. Fontaine and Percier were received at Malmaison on 31 December 1799 and presented to First Consul Bonaparte by the painter Jacques-Louis David. They worked on refurbishing Malmaison from 1800 to 1802. Joséphine endeavored to transform the large estate into “the most beautiful and curious garden in Europe, a model of good cultivation”. It had extensive greenhouses and achieved enduring fame for its rose garden.