Civil Resistance and the Processes of Contentious Politics in Egypt, 2010-2015 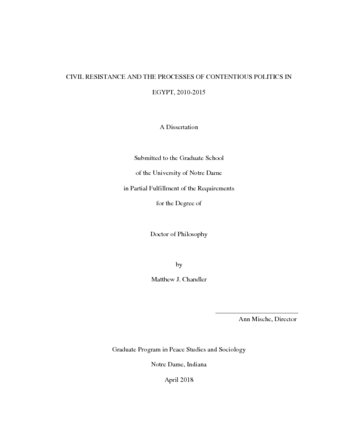 Egyptian pro-democracy activists mobilized two major uprisings in recent years: one ending Hosni Mubarak’s decades-long rule in February 2011, and the other precipitating a coup against newly-elected president Mohamed Morsi in July 2013. Prior research indicates that nonviolent campaigns succeed more often and are more likely to result in democracy than armed insurgencies. The theory, in essence, is that nonviolent campaigns better facilitate popular participation, which simultaneously serves to mobilize more potent campaigns and encourage democratic governance. But that explanation is inadequate when civil resistance has mixed outcomes, as in the case of Egypt. Therefore, this dissertation shifts the analytical perspective to the processes of contentious political transitions in which civil resistance campaigns are embedded. It focuses on the years 2010 through 2015 in Egypt, using the two major uprisings as a paired comparison to develop the theorized linkage between civil resistance and democratization. It finds that civil resistance in Egypt operated through multiple mechanisms that interacted dynamically over time and were sensitive to changes in the wider structure of political relations.