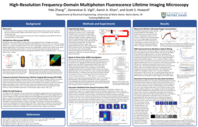 Multiphoton microscopy (MPM) is a widely used in vivo imaging technique in biological and medical applications. In the case of two-photon excitation fluorescence, two lower-energy photons excite a fluorophore which in turn emits a single higher-energy photon, whose rate depends quadratically on the excitation intensity, thus enabling higher resolution with narrower point spread function (PSF) than conventional one-photon fluorescence microscopy. Fluorescence lifetime imaging microscopy (FLIM) is also a powerful tool in biological, chemical, and medical studies by providing an additional contrast, the fluorescence decay lifetime of excited fluorophores, in optical microscopy. Since the fluorescence lifetime can be employed as the indicator of local ion or dissolved oxygen concentration, FLIM is a powerful tool to measure the microenvironment in biology. The MPM and FLIM techniques can be combined into an integrated imaging system for three-dimensional quantitative in vivo imaging. It not only possesses the advantages of MPM such as large imaging depth, but also the strengths of FLIM including the ability to discriminate different fluorophores with similar emission spectra. In this study, we propose a novel frequency domain MPM-FLIM platform, where the excitation light’s amplitude is modulated by an electro-optic modulator (EOM), and its intensity is controlled such that the fluorophore is driven to saturation. With the amplitude modulation, fluorescence lifetime can be measured in the frequency-domain at the fundamental modulation frequency and its harmonics. By driving the fluorophore into saturation and demodulating the higher harmonics from the saturated fluorescence light signal, imaging resolution beyond the diffraction limit can be obtained. Although the higher harmonics of the fluorescence signal have improved imaging resolution, their intensities are generally weaker than the fundamental harmonic signal; therefore it is important to consider the signal-to-noise ratio of this method during the experiment. The trade-off between signal-to-noise ratio and imaging resolution, especially for higher harmonic signals, is also discussed. Possible applications of the proposed high-resolution frequency-domain MPM-FLIM include imaging the concentration of oxygen and calcium ions at sub-cellular level, which could be beneficial to cancer research.