Three Essays in Culture and Cognition 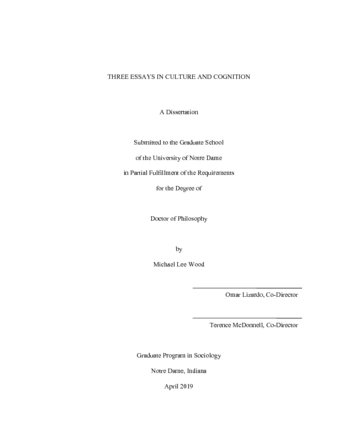 This dissertation consists of three essays on culture and cognition, with a special focus on issues and opportunities relating to text and interview data. In the first essay I develop a formal approach to analyzing patterns of cultural activation in moral reasoning, adapting Swidler’s (1986) concept of “unsettledness” to discern the degree of diversity in reasoning about a given topic. I then use the framework to identify variation in unsettledness in American parents’ reasoning about the age-appropriateness of a variety of different practices. In the second essay I take up the question of what interviews can tell us about culture and action, responding to recent critiques claiming that the language used in interviews are unable to tell us much about behavior because they evoke declarative memory that is removed from experience (Stephen Vaisey 2009; Martin 2010; Jerolmack and Khan 2014). Drawing on contemporary cognitive linguistics, I argue that by measuring concreteness in language, interviews and text data more generally can give access experiential traces linked to past and future action. I test this hypothesis using a combination of interview and survey data from the National Study of Youth and Religion, and I find that the concreteness with which adolescents discuss their religious beliefs and practices is positively correlated with the frequency of religious attendance when they are young adults. In the third essay I develop a framework for thinking about culture in reasoning that accounts for the fact that 1) patterns in reasoning vary across groups and individuals, and 2) reasoning is a situationally-variable process that changes depending on the substance and framing of the topic at hand. Drawing on work from cognitive linguistics cognitive anthropology, I argue that American parents share a cultural model for reasoning about age-appropriateness consisting of basic schemas associated with the task of making judgments and a set of affordances associated with the domain of age-appropriateness. This model is deployed flexibly and variably depending on parents’ experiences with the task in question. The three essays vary considerably in method and content, but each develops new ways of conceptualizing and measuring personal culture found in text data, challenges common beliefs about the uses and limitations of interviewing, and opens new avenues for future research.