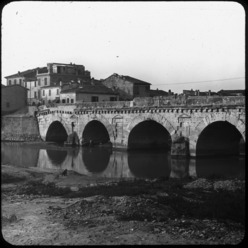 A five-arched marble bridge from the Roman period. The bridge features five semicircular arches with an average span length of ca. 8 m. Construction work started during Augustus’ reign and was finished under his successor Tiberius in 20 CE; an inscription thus calls the structure as “given by both emperors”. The bridge was the only crossing of the Marecchia not destroyed by the retreating German army during the Battle of Rimini. The bridge is still open to pedestrian and light vehicular traffic