Roman Theater, Dougga: Overall view, seen from the slope below 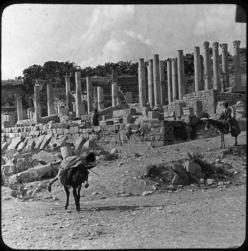 Dougga reached the height of its territorial expansion under the Antonines and Severans (AD 138-235), when it covered more than 25 ha; its population seems to have been between 5000 and 10,000. The town profited a great deal from local benefactors; for example, P. Marcius Quadratus had the theatre built between AD 168 and 169. The theatre was built into the hillside at the top of the city slope and could seat over 3000 spectators. The theatre is still used for performances of classic theatre, particularly during the festival of Dougga, and conservation work has been carried out on it.