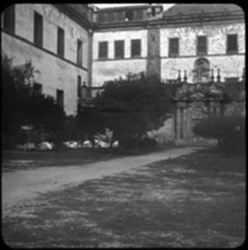 A monastery in Coimbra, Portugal built to replace the mediaeval Monastery of Santa Clara-a-Velha. The monastery was built in the 17th and 18th centuries. The project of the monastery was entrusted to Father João Turriano, a benedictine monk and royal engineer, who conceived the ensemble in the simple Mannerist style of 17th-century Portugal. Construction works were led by royal architect Mateus do Couto. The church, consecrated in 1696, is of rectangular floorplan, has a single-aisled nave and lacks a transept. The interior is illuminated by a series of (clerestory) windows located on the second storey of the nave.