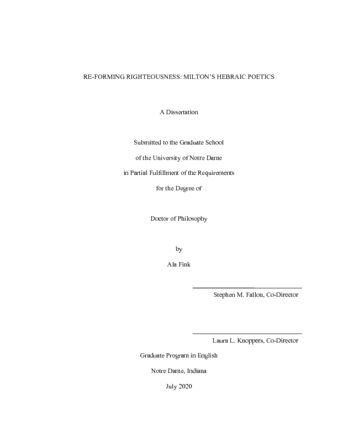 This dissertation explores the importance of Hebraic righteousness in re-forming narrative and informing character development in Milton’s major poems. Where earlier scholarship has focused on righteousness from a soteriological perspective, I argue that Milton turned instead to the narratives, and the language, of the Hebrew Bible. The place currently afforded to the Hebrew Bible in Milton’s poetics is mostly typological, and this approach tends to obscure events in the Hebrew Bible that do not cohere with moments in the Gospel and ignores their presence in, and influence on, the poetry. To investigate the depth and shape of Milton’s engagement with the Hebrew Bible, I analyze the ways in which narratives and characters in the Hebrew scriptures inform Milton’s late masterpieces. Milton’s reliance on the Hebrew Bible to shape his poems extends to the change that characters undergo in the poems and their subsequent development. I call this far-reaching engagement with the Hebrew Bible in Milton Hebraic poetics. The centrality of righteousness as understood in the Hebrew Bible for Milton’s poems lies in that it connects God and people and people to each other through ethical relations of reciprocity. The relational aspect accorded to righteousness in the Hebrew Bible largely stems from the etymological connectedness of “righteousness” and “justice,” which are derived from the same root in Hebrew. In each of the major poems, Hebraic righteousness serves as a model for the main characters’ actions: In Paradise Lost, the Son reminds the Father that divine justice is also divine righteousness by calling upon Abraham’s conversation with God regarding the destruction of Sodom, and Adam and Eve exercise their righteousness through discourse and hosting the angel Raphael; in Paradise Regained, the Son employs his understanding of Job’s perfect righteousness and of Moses’ mistake to sustain his rebuttals to Satan; and in Samson Agonistes, Samson’s development is modeled after Psalmic repentance that requires a belief that a retrieval of personal righteousness is always available through appeal to divine righteousness.