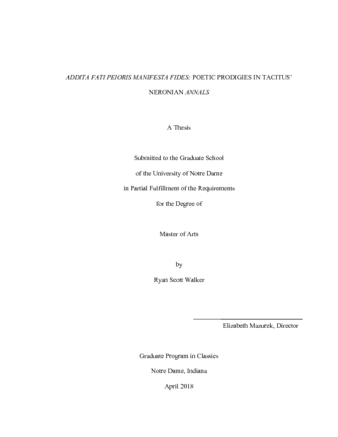 Through an examination of Tacitus’ narrative in the Neronian Annals, particularly those passages describing portents, the current study aims to demonstrate that Tacitus’ depiction of Neronian omens are meant to paint a picture of Nero’s reign as a harbinger of civil war. In the process, this study also aims to show that Tacitus alludes to a number of poets, including Vergil and especially Lucan, to make his portent passages poetic. Furthermore, by using his portent passages to such effect, Tacitus manipulates the familiar annalistic structure of historiography in order to draw attention to his major narrative themes.

First, I will argue that Tacitus adapted the use of prodigies from the Roman annalistic tradition, transforming them from a record of strange events to a narrative device. Then, I will discuss how Tacitus’ portrayal of Nero resembles an epic character, building on Lucan’s Caesar for inspiration rather than Vergil’s Aeneas. Fianlly, I will use a close reading of the prodigy catalogues to demonstrate how Tacitus uses the portents in service to his narrative program.