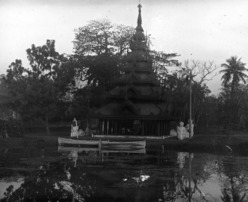 A Hindu temple situated at Pushkar in the Indian state of Rajasthan, close to the sacred Pushkar Lake. The temple is one of very few existing temples dedicated to the Hindu creator-god Brahma in India. The temple dates to the 14th century, partly rebuilt later. The temple is made of marble and stone slabs and holds the image of four-headed Brahma and his consort Gayatri.