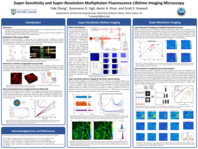 To fundamentally understand biological and medical phenomena such as aging and diseases, we need the information of the microenvironment surrounding living cells. We propose the multiphoton fluorescence lifetime imaging microscopy (MPM-FLIM) platform with super-sensitivity and super-resolution capabilities to quantitatively obtain this information at the intracellular level. First, we present a simple MPM oxygen imaging probe compatible with aqueous biological media based on water-soluble ruthenium-complex nanomicelle. By adding a layer of silica shell to the nanomicelle assembly, oxygen sensitivity and probe stability in biological media increases dramatically. Second, we implement the super-sensitivity lifetime imaging by nonlinear optical mixing. With the intensity modulation of the excitation light, fluorescence lifetime can be measured in the frequency-domain at the fundamental modulation frequency (𝜔) and its harmonics (𝑛𝜔). Conventionally, the lifetime is measured at 1𝜔 and 2𝜔. The DC&1𝜔 lifetime measurement method that we proposed shows superior imaging sensitivity which doubles the imaging speed. Finally, we propose a super-resolution imaging technique by saturated excitation. When the excitation intensity is modulated and strong enough to partly drive the fluorophores into saturation, harmonic distortion in the fluorescence will be generated. Since the molecules in the focal center will undergo harmonic distortions earlier and heavier than the periphery, the demodulated signal from higher harmonics can be attributed solely to the center, acting as a point spread function (PSF) with improved resolution. By driving the fluorophore into saturation and demodulating the harmonic distorted fluorescence signal, we obtain DC and many harmonics. As the average excitation intensity changes, the harmonics variate in an interesting way: some harmonics (DC and 1𝜔) go smoothly, while others (2-4𝜔) encounter zeros at some specific excitation irradiances. Due to the extremely high nonlinearities around and at the zeros, super-resolution capability can be obtained.