A Long Road to Canaan: The Capuchin Missionaries and the Rise of Liberation Theology in Eastern Nicaragua, 1939-1979 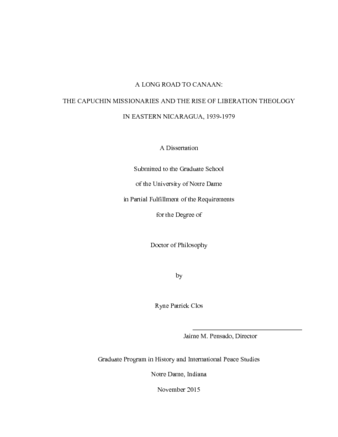 This dissertation investigates the mission established by the Detroit Province Capuchins in eastern Nicaragua from 1939-1979. Its emphasis is a transformation in the missionaries’ ministry enacted in 1967, which involved the adoption of new experimental techniques. The central historical contention is that this transformation led to the creation and diffusion of liberation theology in Nicaragua. The revisionist portrait of liberation theology emphasized here challenges existing understandings of the way this religious movement arose throughout Latin America.

The dissertation contends that the overlapping socio-political movements of the “Long Sixties” (1959-1973) destabilized the ideas about Catholicism and the priesthood that the Capuchins had championed in Nicaragua since the 1930s. This period cast them into a crisis that climaxed in 1967. Dozens of other missionaries in Latin America experienced similar vocational crises. A small subset of the missionary community, however, did not respond to the events that shaped the Long Sixties with bewilderment. These pioneering priests instead utilized experimental pastoral methodologies to reinvent the priesthood for the unique demands of the setting. The Capuchins, and many of their peers, turned to these experimentalists as a way of resolving their vocational crisis. In this way, early experiments, which would later be formalized and systemized as liberation theology, proliferated on an ad hoc basis across Latin America.

The Capuchins borrowed techniques from their peers and modified them to fit their unique circumstances. In particular, they borrowed three practices. First, from Leo Mahon, a missioner from Chicago to Panama City, they adopted the Delegates of the Word. The Delegates initiative involved training local laymen to act as surrogate priests. From the Society of Foreign Missions in Choluteca, Honduras, the Capuchins imitated the Celebration of the Word, a reinvention of the mass characterized by group discussion of biblical passages. Finally, from the Brazilian theorist Paulo Freire, the Capuchins enacted the pedagogy of the oppressed and enshrined “conscientization” as the primary goal of their mission. Over the next decade, these practices evolved into a rigorous, coherent system, the missionary pedagogy of the oppressed, a nascent form of liberation theology.