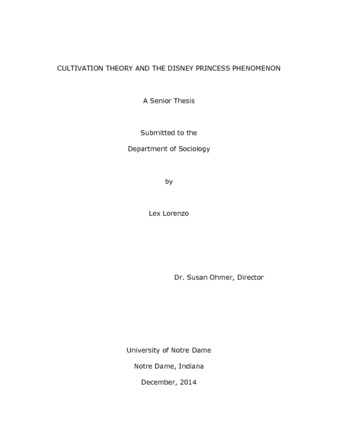 While some study has been conducted on Disney films and gender roles, the research is minimal on Disney Princess films from 2009 and forward. In contrast to their predecessors, recent Disney princesses are not marriage focused, display more agency, and have bodies that reflect physical development that is consistent with their age. Furthermore, the portrayal of older females is not singularly vilified and they are not absent as in comparison to previous Disney princesses films. Through cultivation theory viewers are encouraged to believe that the gendered messages in the Disney princess films are equitable to reality, and the Disney Store allows a viewer to extend their experiences with the princesses through merchandise and play. That is why it is pivotal that Disney princess films have begun, and continue, to have a complex idea of gender.