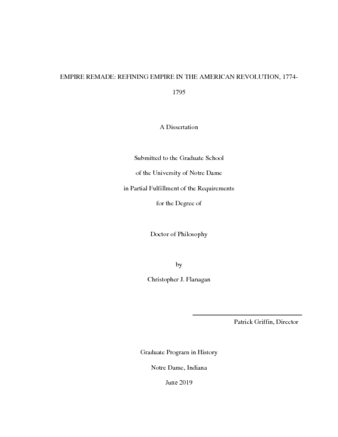 In Empire Remade: Refining Empire in the American Revolution, 1774-1795, I analyze the political thought of the American elite during the collapse of British rule in North America and the formation of the United States, to better understand the centrality of empire to the American Revolution. I argue that American state-building was shaped by specific political debates of the period, fought within the intellectual constraints of empire, and forced to reconcile empire with republican government. The compromises that resulted from these debates, though unexpected, ended up making the American empire stronger. I argue that American leaders laid the groundwork to the United States’ subsequent rise to world power at the very beginning of the country’s independent existence, carrying over imperial dreams and ambitions from its colonial past.

Empire Remade begins with the imperial crisis of the 1770’s, as colonial elites attempted to reshape the British Empire from within through a range of policies, from petitions through to military resistance, culminating in the invasion of the neighboring province of Quebec to leverage imperial redress. Only when this failed did Americans embrace independence. The second, central part of the project explores how the debates surrounding the ratification of the Constitution gave a forum for a union-wide interrogation of the nature of the US’ nascent republican empire. Shifting concepts of empire allowed American leaders to combine power and liberty in a way that allowed imperial expansion alongside free government.

Out of these debates, Americans forged a popular empire, which they then sought to manifest on the North American continent. Yet empire on the ground presented a new set of challenges, complicated by the empire’s very republican nature. US military and civil leaders debated how to balance the interests and power of the settler societies and native communities of the trans-Appalachian West. From another unhappy compromise between these groups’ demands came a form of imperial management, ensuring settler assimilation while temporarily accepting Native difference, that allowed for the United States’ unprecedented expansion through the nineteenth century.