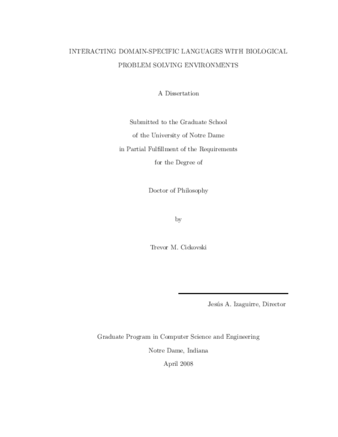 Iteratively developing a biological model and verifying results with lab observations has become standard practice in computational biology. This process is currently facilitated by biological Problem Solving Environments (PSEs), multitiered and modular software frameworks which traditionally consist of two layers: a computational layer written in a high level language using design patterns, and a user interface layer which hides its details. Although PSEs have proven effective, they still enforce some communication overhead between biologists refining their models through repeated comparison with experimental observations in vitro or in vivo, and programmers actually implementing model extensions and modifications within the computational layer. I illustrate the use of biological Domain-Specific Languages (DSLs) as a middle level PSE tier to ameliorate this problem by providing experimentalists with the ability to iteratively test and develop their models using a higher degree of expressive power compared to a graphical interface, while saving the requirement of general purpose programming knowledge. I develop two radically different biological DSLs: XML-based BioLogo will model biological morphogenesis using a cell-centered stochastic cellular automaton and translate into C++ modules for an object-oriented PSE CompuCell3D, and MDLab will provide a set of high-level Python libraries for running molecular dynamics simulations, using wrapped functionality from the C++ PSE ProtoMol. I describe each language in detail, including its its roles within the larger PSE and its expressibility in terms of representable phenomena, and a discussion of observations from users of the languages. Moreover I will use these studies to draw general conclusions about biological DSL development, including dependencies upon the goals of the corresponding PSE, strategies, and tradeoffs.