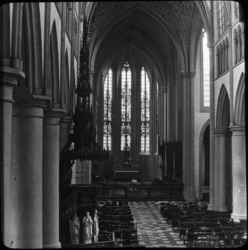 During the French Revolution the ancient cathedral of Liège (St. Lambert’s Cathedral), was destroyed systematically, from 1794 onwards. After the revolutionary fervor had evaporated a new cathedral was needed. The ancient collegiate church of St. Paul’s was thought suitable for the purpose and was elevated in rank, before 1812. This is the present Liège Cathedral. It was founded in the 10th century, reconstructed between the 13th and 15th centuries, and restored in the mid-19th century. The apse, constructed in the 14th century in the Rayonnant style, is pentagonal. In 1812, the tower, with its ogival windows, was raised by a storey and the belltower installed.