Mosque and Tomb of Shah Alam: Detail, partial facade and one minaret of the mosque from the southeast 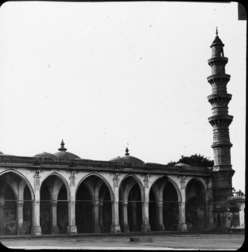 The mosque is one building out of several that comprise the ‘dargah’ or shrine complex of the Muslim saint Shaikh Shah Alam. The saint was spiritual advisor to Sultan Mahmud Shah Begarha (reigned 1458-1511) and his shrine is still an important centre for pilgrimage today. The tombs and assembly hall date to the late fifteenth century, but this mosque was built during the later sixteenth century. It has an open-fronted sanctuary facade with high, staged minarets at either end. The mosque is roofed with three large domes and sixteen smaller ones around the edge.