Bardo Palace: Interior of one of the palaces with reception hall and throne room 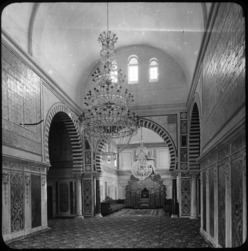 Built by the Islamic Hafsid rulers of Tunis who were one of four regional powers to emerge in the Maghrib after the collapse of the Almohad empire in 1212. Hafsid culture is a meeting of east and west: the many Spanish refugees in the region brought their artistic traditions with them and the Hasfids also maintained close ties with the Mamluks of Egypt. The palace was later enlarged by the Ottoman beys of Tunis. It stands in a park in the northern suburbs; it now houses the Archaeological Museum, noted for its collection of Roman mosaics. The National Museum itself is housed in the Little Palace, built in 1831-1832, and the state apartments of the Great Palace (13th century). It has been a museum since 1888.