Hohenzollernbrücke: Distant context view of the bridge from the side 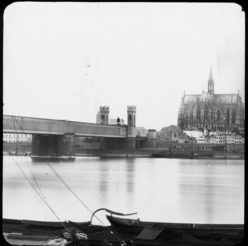 Part of the cathedral is visible beyond the base of the bridge (the towers are missing in the photo, perhaps in fog)

The bridge accommodated pedestrians and trolleys. Two avenues branched from the city side, one led to the cathedral and the other led into the main train shed. It crosses the Rhine at kilometer 688.5. Originally, the bridge was both a railway and street (trolley) bridge, however after its destruction in 1945 and its subsequent reconstruction it was only accessible to rail and pedestrian traffic. On March 6, 1945, German military engineers blew up the bridge when Allied troops started to conquer Cologne. A new bridge with the same name was reconstructed on the site.