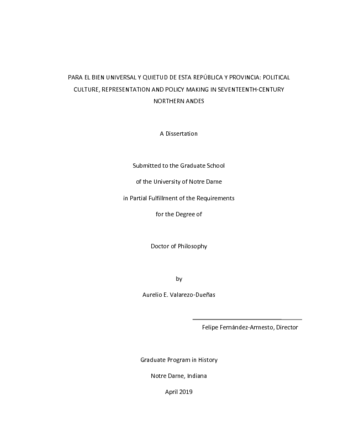 When Antonio de Morga arrived as President of the Audiencia in Quito, a Spanish “kingdom” in middle of the Andes, the prominent families of the city presented him with several tokens of appreciation and allegiance, both to his person and to the king, whom he represented. Far from a shallow custom that allowed local elites to ostent their livery and meet the agents of colonial power, encounters such as this symbolized the renewal of the contractual notion of allegiance prevalent in the Spanish political system. Morga governed for the longest term in Quito’s history, navigating a complex, consensual system, with enduring effects in the region’s political life. Nevertheless, the skilled president has become an inconspicuous side-note in the historiography of the viceroyalty of Peru. Most of the scholarship has focused on his role in the early history of the Philippines, disregarding many of the significant features of Don Antonio’s multifaceted bureaucratic service, and neglecting what I hope to show is an opportunity to examine an archetype – or perhaps epitype – of Spanish political and administrative performance in the overseas territories. I try to deepen knowledge on Morga´s career in an attempt to understand four aspects of political culture in the Real Audiencia in Quito in the seventeenth century:political practices, factions, means of political representation, and social inclusion.

That Spanish authorities negotiated obedience with locally powerful and particular interests is not a new idea, but I contribute to the field by revealing and describing patterns of political behavior in the audiencias. Historians have favored the idea that “colonial” politics were parochial, focused on mere profiteering, driven by localism and dominated by an exclusive oligarchy. I contend that this characterization is inaccurate. The global implications of imperial policy required effective mechanisms of governance and of social and political inclusion to accommodate a wider reange of individuals, groups and interests than historical tradition commonly covers. Without outlets of such collaborators the Spanish monarchy could not successfully have exerted dominance in the region for over three centuries.