Monument to Maximilian I: Context view with holy water basin and carved church pews in front of the monument 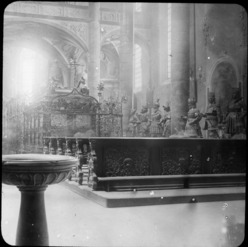