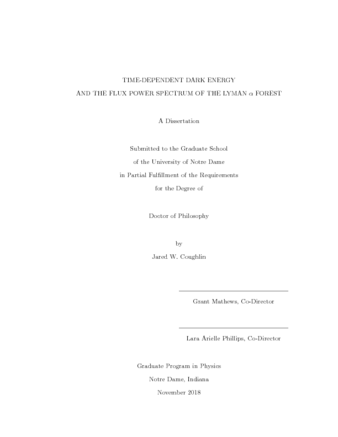 Dark energy is the as yet unidentified mechanism responsible for the accelerated expansion of the universe. Understanding this mechanism is one of the most important problems in modern cosmology for two reasons. First, dark energy is estimated to be responsible for approximately 70% of the energy content in the Universe, which means that we cannot have a complete model for the evolution of the structure in the Universe without understanding dark energy. Second, the current Standard Model of physics does not provide an explanation for dark energy. This means that understanding dark energy could serve as a gateway to physics beyond the current Standard Model.

The onus of constraining dark energy falls on observations. Since dark energy affects the expansion of the Universe, studying the behavior of dark energy currently requires the use of observables sensitive to the expansion. These include Type Ia supernovae, baryon acoustic oscillations, the anisotropies in the cosmic microwave background, and weak gravitational lensing. However, at present, the constraints provided by these probes are still rather weak. This leaves the pool of viable dark energy models quite large. There are two ways to alleviate this problem: the first is to acquire more data from those observational probes that are already employed, and the second is to develop complimentary observational probes.

To this end, I have run five high-resolution, large-scale cosmological simulations using a modified version of the publicly available smoothed-particle hydrodynamics code GADGET-2. Each simulation employed a different dark energy model. Four of these dark energy models are dynamical models while the fifth is the standard cosmological constant, or vacuum energy. I then developed efficient massively-parallel codes in order to extract both synthetic Lyman alpha Forest spectra and synthetic flux power spectra from my simulations.