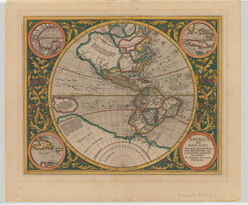 The Scanlan Collection includes close to 200 historical maps of the Great Lakes region of North America, ranging in date from the early 17th to the early 20th century. The collection came to the University in 2003-04, the gift of Edward and Sheila Scanlan of Neenah, Wisconsin.

The 17th century maps include works by Mercator, Sanson, Coronelli, and others, and generally depict the whole of North America or regions east of the Mississippi River, including the British colonies and Canada. The 18th century maps, by such creators as Homann, Chatelain, and Bellin, continue the coverage of Canada and focus on the Mississippi River as well. They also provide some of the earliest detailed views of the Great Lakes region itself, and among the later works, maps of the new United States. Altogether, the 17th and 18th century maps constitute approximately one-quarter of the items in the collection.

The 19th century maps in the Scanlan Collection include representative works from many of the leading commercial mapmakers of the antebellum era, such as Carey, Tanner, Morse, Mitchell, and Colton. Maps of the Old Northwest along with territorial and state maps of Michigan and especially of Wisconsin predominate. There are also a large number of government survey maps by the Army Corps of Engineers, depicting individual river courses and proposed sites for canals and harbor improvements (usually situated in Wisconsin). General Land Office maps of various Great Lakes territories and states show survey lines and patterns of early settlement. One particularly spectacular government map by Nicollet reveals the upper basin of the Mississippi River in great detail. The collection also includes both government and commercial cadastral maps of several individual villages and townships in Wisconsin. Capping the collection chronologically are some early 1900s highway system maps.

The Scanlan Collection provides an overview of the historical development of the Great Lakes region from its earliest exploration to the age of the automobile. Depictions of the lakes themselves change size and shape over time, and do not achieve wholly familiar form until the mid-19th century. The names of Native American tribes fill much of the blank space of the earlier maps, gradually giving way to the survey lines, place names, and other geographical details imposed by European and American settlers. Certainly the collection reflects the passion for internal improvements that typified pre-Civil War America. Roads, harbors, canals, locks, and dams make their appearance on the maps, as do railway lines. These historical trends and others may be traced through the broad range of works brought together in the Scanlan Collection.