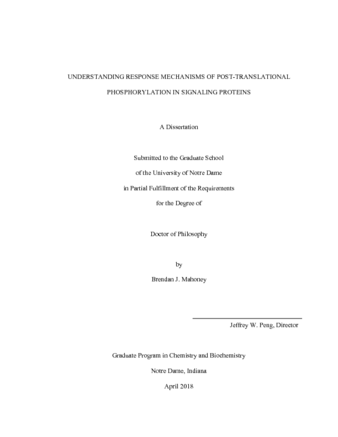 Proper maintenance of the cell cycle relies on regulation via pathways of signaling proteins. The function of these cell signaling proteins is often modulated by post-translational modifications (PTMs), which install new functional groups on target amino acid residues. These modifications can affect the ensemble of conformations a protein samples, and thereby its function. An abundant PTM in eukaryotes is the reversible phosphorylation of serine, threonine, or tyrosine residues. Such phosphorylation can have diverse effects that include alteration of enzymatic activity, substrate binding affinity, and/or oligomerization states.

While phosphorylation sites and their biological effects have been documented for numerous proteins, their atomic mechanisms are not well understood. It is known that the addition of the phosphate moiety both increases side chain steric bulk and adds negative charge. However, there is also growing evidence that the orientations and motions of side chains promote allosteric changes stimulated by phosphorylation. Therefore, it is important to study how PTMs affect functional dynamics. In many cases, phosphorylation sites are also surrounded by charged and polar amino acids, whose side chains would be expected to be sensitive to the change in local environment.

Using solution NMR techniques on our model protein human Pin1, this thesis describes new evidence of pre-existing networks of electrostatic interactions that are perturbed by phosphorylation and mediate long-range allosteric changes. This same principle appears to be used in Pin1 to effect distinct functional consequences. Comprehending how these phosphorylation events affect Pin1 function will hopefully lead to the ability to better predict the outcomes of these PTMs in other cell-signaling proteins. Enhanced understanding of the atomic-level response mechanisms to post-translational phosphorylation may lead to principles important in emulative drug design.