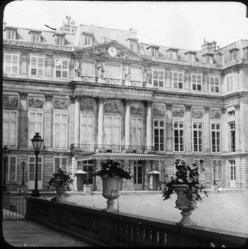 This was the oldest section, begun 1660.

The château was expanded by Phillipe de France, duc d'Orléans in the 17th century, and finally enlarged by Marie Antoinette in the 1780s. Napoleon I and Napoleon III also used the palace, which was a U-shaped scheme of three sections, open to the east. Destroyed by fire (with the exception of a few outbuildings and its majestic garden) in 1870, during the Franco-Prussian War. The burned-out shell stood until 1891, when it was demolished. The gardens were replanned by André Le Nôtre, and the park took on the dimensions it retains today. The Grande Cascade, constructed in 1664-1665 by Antoine Le Pautre has survived.