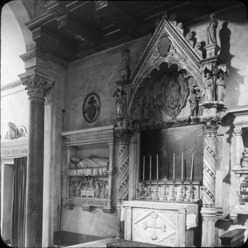 It is possibly the first church in Rome where Mass was celebrated openly. It was probably built by Pope Julius I (337-352), although tradition claims that it may have been built before 313, perhaps as early as soon after Pope Calixtus’ death in 222. It was rebuilt under Pope Innocent II (1138-1148), in the first years of his pontificate. He kept the basilical plan, at a time when the Gothic style was gaining popularity in Northern Europe. “Although the present structure of S Maria in Trastevere is substantially that of Innocent II’s rebuilding, only the apse conch and the surrounding arch preserve their original decoration. Later additions and four major restorations have greatly altered the original appearance: that by Cardinal Marcus Sitticus Altemps in 1580-1595, Cardinal Pietro Aldobrandini in 1612-1620, Clement XI (reigned 1700-1721) and Pius IX (reigned 1846-1878), who commissioned Virgilio Vespignani’s remodelling of the church from 1863. The conch mosaic shows Christ Enthroned and the Crowned Virgin (1148).”