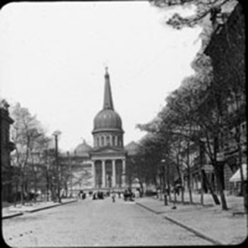 The Peter and Paul Cathedral is a Russian Orthodox cathedral located inside the Peter and Paul Fortress in St. Petersburg, Russia. It is the first and oldest landmark in St. Petersburg, built between 1712 and 1733 on Hare Island along the Neva River. Both the cathedral and the fortress were originally built under Peter the Great and designed by Domenico Trezzini. The cathedral’s bell tower is the world’s tallest Orthodox bell tower. The Peter and Paul Cathedral marked a radical departure from traditional Orthodox churches, being built in early Baroque style. Its rectangular shape, bell-tower, and landmark needle are all features borrowed from the protestant churches of Western Europe - the influence of Dutch architecture is particularly visible - all of which was in accordance with Peter’s wishes. The cathedral houses the remains of almost all the Russian emperors and empresses from Peter the Great to Nicholas II and his family.