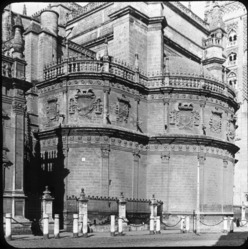 The new Capilla Real at the east end to house the tombs of the Castilian monarchs previously buried there was completed 1575, to designs by Alonso de Covarrubias. It contains the tomb of Fernando III (El Santo) in a rich, silver shrine. The tombs on either side belong to Fernando’s wife, Beatrice of Swabia, and his son, Alfonso the Wise.