Validity of Personality Ratings from the Self, Informants, Interviews, and Documents 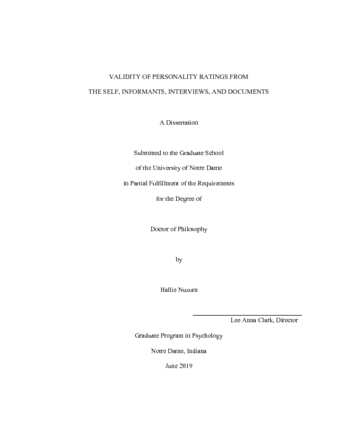 Psychological research on adults often relies on participants’ self-report, despite agreement that gathering information via multiple assessment methods (e.g., interview and questionnaire, self- and informant report) is important for establishing measurement validity. In this study, I examined personality trait assessments from multiple sources—the self, informants, interviewers, and written documents—each of which provides information from a different perspective, and therefore has its own validity, biases, and limitations. Assessments included measures from two measurement models: the Alternative Model for Personality Disorder (AMPD) in the Diagnostic and Statistical Manual of Mental Disorder–5th edition (DSM-5; American Psychiatric Association, 2013) and the Schedule for Nonadaptive and Adaptive Personality (SNAP; Clark, Simms, Wu, & Casillas, 2014). Research that includes this many measures and concurrent sources of information about target individuals is rare. In this study, I examined the validity of ratings via various methods: measurement reliability, cross-source agreement, and relations with psychosocial-functioning and psychopathology outcomes. Moreover, I provide evidence supporting the validity of measurements that used a document-based instrument in a general psychiatric-adult sample. Mean-level agreement revealed that participants generally rated themselves as more pathological than did interviewers or informants. Convergent correlations were weaker than hypothesized, with mild agreement between self and interviewer and weak agreement among all other sources. Hierarchical regression analyses demonstrated the strength of within-source associations, with modest incremental contributions from other sources. Considerations for using multiple sources of personality data are discussed.