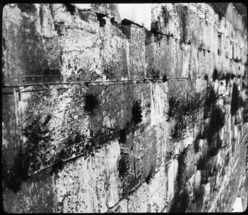 The Wall consists of 45 stone courses, 28 of them above ground and 17 underground. The first seven visible layers are from the Herodian period. This section of wall is built from enormous meleke limestone stones.

According to Jewish tradition and scripture, (2 Chronicles 3:1-2) the first temple was built by Solomon the son of David in 957 BCE and destroyed by the Babylonians in 586 BCE. The second was constructed under the auspices of Zerubbabel in 516 BCE. Around 19 BCE, Herod the Great further expanded the Mount and rebuilt the temple (still known as the second temple, destroyed by the Roman Empire in 70 CE.) In addition to renovating and enlarging the Temple, he artificially expanded the area, which resulted in an enlarged platform. Today’s Western Wall formed part of the retaining perimeter wall of this platform. The Western Wall commonly refers to a 187 foot (57 m) exposed section of ancient wall situated on the western flank of the Temple Mount. This section faces a large plaza (created 1967) and is set aside for prayer. According to Jewish Law, one is obligated to grieve and rend one’s garment upon visiting the Western Wall and seeing the desolate site of the Temple, hence the popular name Wailing Wall.