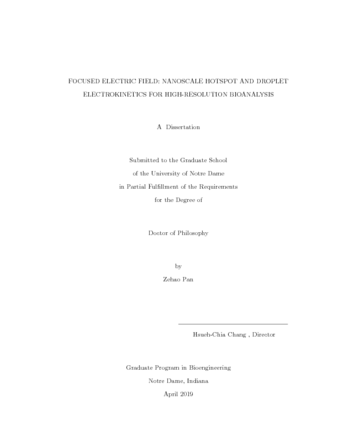 High-resolution bioanalysis has become increasingly important in recent years as the field of bioengineering advances to cellular and molecular level. Many new diagnostics technologies that can achieve highly sensitive and accurate biomolecular detection have been invented, such as digital polymerase chain reaction (dPCR), rapid sequencing and single molecule spectroscopy. All are supported by microfluidic technologies that can partition and transport the molecules or their vehicles like vesicles and cells.These technologies, however, are still not widely adopted in the medical industry, due to their functionality and high-cost. For example, the commercial digital PCR system by Bio-Rad has a prohibitively high sample and equipment cost, because of its microfluidic chip design and its precise micropump for droplet generation. Such cost issues render it noncompetitive to the existing real-time PCR system despite its superior quantification accuracy and sensitivity. Nanopore has been predominantly used for sequencing applications (Oxford Nanopore products) but its unique features also offer possibilities for precise identification of very few molecules using heat based phenomena such as thermophoresis and molecule hybridization. So far, these applications have not materialized due to a lack of control and understanding of a nanoscale hotspot inside a nanopore, although startups like NanoTemp Technologies have put larger-scale products on the market. Over 100 companies are developing Carbon Nanotube molecular sensor technologies but none has been commercially successful for the same cost issues in reagent, chip and equipment manufacturing. The fledgling cellular 3-D printing, immunotherapy drug selection and tissue engineering industries will require bulk quantities of these molecular sensors, thus further elevating the need for low-cost but highly sensitive molecular diagnostics technologies.

As an alternative approach to the conventional flow-based microfluidic methods, electrokinetics offers new possibilities to tackle the current issues in high resolution bioanalysis. When focused at a micro- or nanoscale by a point, cone or wedge, the local electric field increases its magnitude by orders of magnitude without additional instrumentation. In contrast, enhancing the shear rate of a flow field by the same factor would require a bulky mechanical micropump with high pressure and high precision. Electrokinetic designs hence allows very compact device suitable for commercial use but also provides high-resolution bioanalysis. Methods using electric field also have the advantage of straightforward integration with the electronic control system without the use of micro-pumps and other actuators. These unique features of a focused electric field are exploited in this dissertation to invent several new technologies. Chapter two is devoted to generating nanoscale hotspot using Ohmic heating in a conic nanopore. Matched asymptotic expansion of the heat conduction equation is used to predict the temperature and conductance increase of the nanopore which shows good agreement with both simulation and experiments. In Chapter three, a new method for monodispersed water-in-oil emulsion generation based on immersed alternating current electrospray (iACE) is introduced. Tuning droplet size is achieved in iACE by adjusting the applied potential and pressure. A self-similar relationship is developed for the electric field at the tip of a semi-infinite structure that can predict the size of the droplet generated by iACE in the dripping mode. In Chapter four, iACE is applied to digital loop-mediated amplification for DNA target detection with the detection limit reaches 300 aM. The use of electrospray for emulsion generation is further expanded in Chapter five for single-cell encapsulation with the aim of applying to regenerative therapy and 3-D tissue printing.