The Israeli Kidnapped Prince – A Glance into the Phenomenology of Ethiopian Ethnicity, and Discrimination in Israel 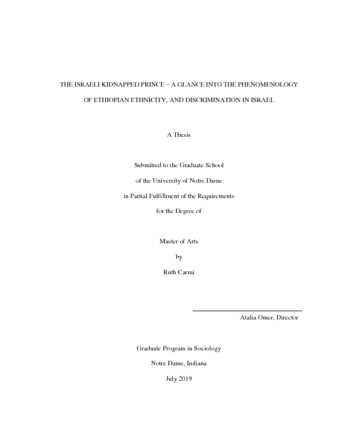 On December 2013, a seven-justice panel of the Israeli Supreme Court ruled 5-2 that a three-year-old Ethiopian toddler would remain with his foster non-Ethiopian family rather than being adopted by his Ethiopian aunt. This paper analyzes the Supreme Court decision, showing how the justices use discursive tactics to divorces the child’s Ethiopian origin from the larger context of Israel’s racial and ethnic formation. By using these five tactics of color-blindness, denying blackness, reduction of ethnicity, individualism, and dichotomizing certainly/uncertainty and intuitive/evidence, the Supreme Court introduced bias into its decision.

While the Court’s decision might appear to be an isolated decision in a particular case, it should be read in the socio-historical context of the phenomenology of race, ethnicity, and discrimination in Israel - that is, in the context of the ongoing discrimination and marginalization of non-Ashkenazi Jews in Israeli society. This supposedly specific case of adoption and the Israeli regulations and practices surrounding adoption work together to marginalize Ethiopian Jews under the cover of the law, and it proclaims to neutrality. While Israel’s adoption law demands religious matching between the adopting parents and the adoptee, it does not deal with questions surrounding ethnic matching. In addition, Ethiopian babies waiting for adoption are labeled by Social Services as ‘special needs’ babies, meaning they have fewer potential parents interested in adopting them. Given the special role of parenting and especially motherhood in Israeli pro-natal society and given the role of families in constructing group boundaries, the case of the ‘kidnapped prince’ is shown to be more than a private case. It is an expression of the phenomenology of race, ethnicity, and discrimination in Israel - or in other words, of what it means to be an Ethiopian in Israel. It is a case in which ‘Israeliness’ and belonging to the Israeli collective are determined by Ashkenazi hegemonies.