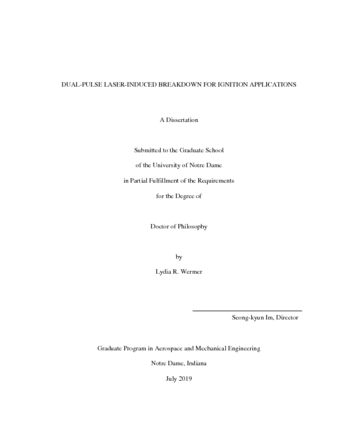 Reliable and efficient ignition methods are important for engine design and reliability. This dissertation investigates a new ignition method, dual-pulse laser-induced breakdown (DPLIB) to address challenges associated with electrical spark ignition and single-pulse laser-induced breakdown (SPLIB) ignition. The plasma formation for DPLIB was investigated in atmospheric air and elevated pressure conditions. The ignition and flame propagation by DPLIB were investigated in a lean premixed methane-air flow.

The spatiotemporal evolution of DPLIB was investigated in quiescent atmospheric air with chemiluminescence imaging, optical emission spectroscopy, and high-speed schlieren imaging. DPLIB with time intervals between pulses from 10 ns to 100 ns had a lower deposited energy than SPLIB. Using optical emission spectroscopy, the N II spectrum from 491 nm to 509 nm was used to obtain the plasma temperature and electron number density for DPLIB and SPLIB. The breakdown perimeter, temperature, and electron number density all increase with increasing total laser pulse energy for DPLIB and SPLIB. For DPLIB with a time interval less than 100 ns, the second breakdown occurs on the outside axial edges of the first breakdown increasing the spark surface area compared to SPLIB.

The hot plume expansion for SPLIB and DPLIB was studied to explore the effects of the laser pulsing strategy on the induced flow. SPLIB and DPLIB with time intervals between pulses of 50 ns to 600 µs were visualized using high-speed schlieren imaging. For SPLIB, the hot plume region increased with increasing incident pulse energy. For DPLIB, the characteristics of the hot plume expansion were dictated by the time interval and energy distribution between pulses. For a time interval of 150 ns, strong pulse-to-pulse coupling induced a second toroidal flow structure that suppressed third lobe generation. Depending on the time interval, the interactions between the hot plumes and shockwaves generated much finer flow structures for DPLIB than SPLIB.

The ignition and flame propagation were investigated by SPLIB and DPLIB in a lean premixed methane-air flow with flow speeds of 3.75 – 12.5 m/s and equivalence ratios of 0.5 – 0.67. Ignition was confirmed with chemiluminescence imaging and the flame propagation was visualized with high-speed schlieren imaging. Ignition probability was measured for SPLIB and DPLIB with time intervals less than 100 ns. The ignition probability increased with velocity for both SPLIB and DPLIB as more fuel-oxidizer mixture was exposed to the ignition source. For a fixed total energy, ignition probability was higher for DPLIB than SPLIB, particularly as the equivalence ratio was increased. Depending on the flow velocity, a change in the total energy determined whether SPLIB or DPLIB had a higher ignition probability at a given flow velocity. The flame propagation was investigated for SPLIB and DPLIB with time intervals between pulses of 100 µs to 5 ms where hot gas expansions could increase the surface area. Two regimes were identified for DPLIB depending on the time interval between pulses, a direct kernel interaction regime and a flame kernel combination regime. The direct kernel interaction regime occurred when the second breakdown immediately combined with the first breakdown. In this regime, DPLIB had faster flame propagation than SPLIB when the second pulse occurred at the base of the first breakdown expansion prior to the first breakdown transitioning to a flame kernel. The kernel combination regime occurred for DPLIB when the two breakdowns separately transitioned to flame kernels and combined as they traveled downstream in the tunnel. In either regime, DPLIB had a faster flame propagation than SPLIB as the flow speed increased. This study showed that using DPLIB to ignite fuel-lean combustible mixtures can enhance ignition and flame propagation compared to SPLIB, particularly at low total laser energy and high-speed flow conditions.