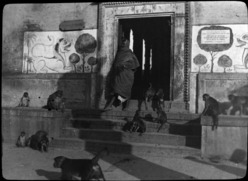 Most of the standing temples at Varanasi were constructed in the 18th century. The conventional style for the temple of this period is in typical northern (nagara) style and characterized by an emphasis on the vertical and a central soaring spire (śikhara) flanked by minor spires (śikharikas). In the typical Varanasi style is the 19th-century deep-red sandstone Durga Kund Temple (erected on ancient foundations by the Marathi Rani Bhawani) with elaborately carved columns, multiple spires and a wide, intricately carved entrance. The temple complex consists of an open courtyard surrounded by a colonnade, which opens on to the tank (kund) on one side; the Durga Kund is one of the many tanks or sacred pools included in various pilgrimage routes as an obligatory site for bathing and performing worship.