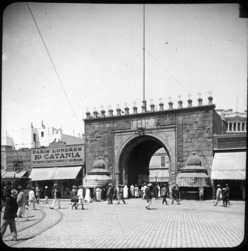 The Sea Gate marks the transition from the old city, the medina, to the new. Just through the Sea Gate (also known as the Bab el Bahr and the Porte de France) begins the modern city, or Ville Nouvelle, transversed by the grand Avenue Habib Bourguiba (Avenue de France; often referred to by popular press and travel guides as “the Tunisian Champs-Élysées”), where the colonial-era buildings provide a clear contrast to smaller, older structures. The gate stands at the point that the Rue de la Kasbah becomes the Avenue de France.