Study of High Energy Levels of 26Mg through the (d,p) Reaction and Its Implications for the Neutron Source in Nuclear Astrophysics 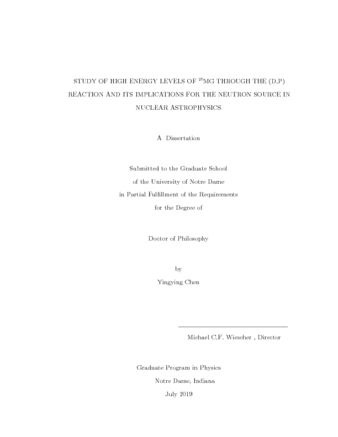 Neutron-capture reactions are believed to be the most effective way of creating elements beyond iron. The s-process, or the slow neutron capture process given its slow neutron capture rate compared to the β-decay lifetime, is one of the main processes that produce elements along the β-stability valley. Among α-capture reactions on light nuclei which provide potential neutrons for the s-process in massive stars, the reaction 22Ne(α,n)25Mg is of particular importance for the neutron production in massive Red Giant stars during core helium burning and AGB stars during helium shell burning. The cross-section of this reaction at stellar energies as well as of the competing capture reaction 22Ne(α,γ)26Mg are dominated by the contribution of low energy natural parity resonances. There are a number of low energy resonances in the 22Ne + α system that have not yet been well measured by the direct measurements because of the extremely small cross-sections. This lack of information brings considerable uncertainties into the reaction rates and may have a significant influence on the nucleosynthesis in massive stars. Since the 22Ne + α system proceeds through excited states in the compound nucleus 26Mg, the indirect measurement of the states of interests in 26Mg could give detailed information about 22Ne+α.

In order to improve the study of 22Ne+α reaction rates, in this work the levels of 26Mg in the astrophysical relevant energy range have been populated indirectly by 25Mg(d,p)26Mg reaction at Research Center for Nuclear Physics (RCNP), Osaka, Japan using the Grand Raiden Spectrometer to achieve the high resolution. 102 states in the high-lying excitation energy region were populated and investigated in measurements in the scattering angle range from θlab = 0.5◦ to 45◦ with the resolution of ~23 keV at 0.5◦ measurements.

Recently, level assignments above the neutron-threshold have been made by (α, α′), (p, p′) and (d, d′), and (n, γ) reactions since the exploration of states above the α-threshold like the (6Li,d) reaction by Talwar et al.. The weighted average from above high-resolution measurements were adopted in this work, thus resulted
in smaller errors compared to the work of Talwar et al.. Two additional resonances were adopted and only used in calculating the upper limits of the (α, γ) reaction rates because they were not observed in the previous α-transfer reaction by Talwar et al.. The improvement of the error in the energy levels from 8-21 keV to 1-2 keV reduces the uncertainties of the reaction rates by factors of ~2-3.

In terms of the astrophysical importance of the 22Ne + α system as a neutron source in the astrophysical region of interest, the reaction rates of the 22Ne(α,n)25Mg and 22Ne(α,γ)26Mg reactions, as well as their ratio were calculated in a different approach compared to the previous work of Talwar et al.. The results of the present work confirm the results of Talwar et al.. Further experiments are needed to reduce the uncertainty originating from the low-lying resonances above the α-threshold.