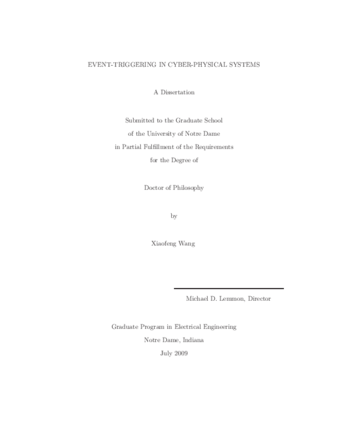 Cyber-Physical Systems (CPS) are the systems integrating physical processes with computation and communication. Embedded computers and networks are used to monitor and control these physical processes. A great challenge in implementing such systems is the timing issue. Our work addresses this issue using event-triggering schemes. We first study event/self-triggering in embedded control systems. Both event-triggering and self-triggering schemes are proposed to enforce specified stability concepts of the resulting sampled-data systems. These results provide a solid analytical basis for the development of aperiodic sampled-data control systems. Based on these results, distributed event-triggering is considered in networked control systems with packet loss and transmission delays. A distributed event-triggering scheme is proposed, where a subsystem broadcasts its state information to its neighbors only when the subsystem’s local state error exceeds a specified threshold. In this scheme, a subsystem is able to make broadcast decisions using its locally sampled data. It can also locally predict the maximal allowable number of successive dropouts (MANSD) and the state-based deadlines for transmission delays. Moreover, the designer’s selection of the local event for a subsystem only requires information on that individual subsystem. With the assumption that the number of each subsystem’s successive data dropouts is less than its MANSD, we show that if the transmission delays are zero, the resulting system is finite-gain Lp stable. If the delays are bounded by given deadlines, the system is asymptotically stable. We also show that those state-based deadlines for transmission delays are always greater than a positive constant.