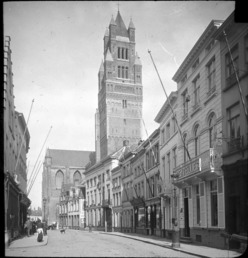 The tower was finished by Robert Chantrell in 1846 in a Romanesque Revival style. The royal commission for monuments (Koninklijke Commissie voor Monumenten), without authorization by Chantrell, placed a small peak on top of the tower, because the original design was deemed too flat.

A 12th-century vaulted basilica with tall triforia. St. Salvator was restored in the 14th century after a fire, and its radiating chapels with Flamboyant tracery were added from 1482 by Jan van den Poele (fl 1478-1520). Its west tower was begun in the 12th century, but the upper part was completed only in 1846 by Robert Chantrell, in a Romanesque Revival style. The church is known for its Baroque organ, originally built by Jacobus Van Eynde (1717-1719) and rood screen.