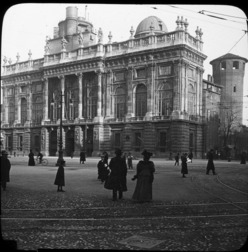 Founded under Emperor Augustus in ca. 28 BCE as a colonial settlement for military veterans, the orthogonal street layout of the Roman castrum forms the nucleus of modern Turin. The Roman walls were reinforced with towers under the comune. The east gate, which connected the city to the River Po, was radically rebuilt in 1317-1319, when it became the fortified Castello degli Acaja (now Palazzo Madama). It passed to the House of Savoy. Marie Jeanne of Savoy, lived in the palace, conferring upon it definitively the nickname of Madama (Italian for Madame). She asked architect Filippo Juvarra to design a new Baroque palace in white stone, but the works halted in 1721 after only the front section had been completed. Since 1934 it has housed to the City Museum of Ancient Art (Museo Civico d'Arte Antica).