Monument to Maximilian I: Detail of four of the 28 statues of rulers 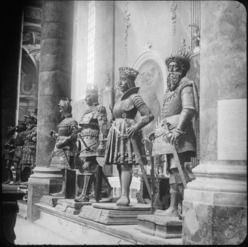