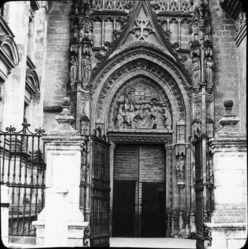 Christ’s entry to Jerusalem on Palm Sunday is depicted in the tympanum of the portal.