Sex and the Senses: The Poetic Process in Aristophanes' Thesmophoriazusae 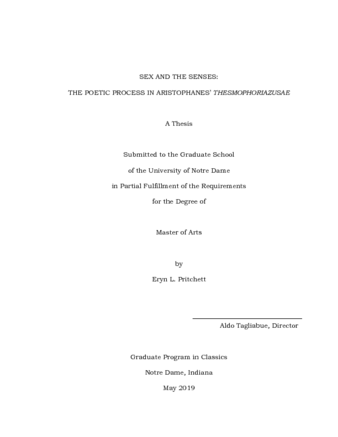 This thesis offers a new interpretation of the Thesmophoriazusae which further explores the transvestment of characters within this comedy. I will argue that the repeated use of sex and senses language creates a reciprocal relationship of stabilization and deconstruction that allows for a more sophisticated reading of the transvestment. In chapter one, I analyze the sex and senses language inside the prologue and how they connect to a metatheatrical reading of the play.[1] In chapter two, I focus on how this interpretation sheds new light on the assembly scene. The connection between the sex and senses which is established by chapter one creates subtle expectations for the audience, which Aristophanes is able to challenge in the assembly scene, so that gender identity is always unstable, always unsure.

Throughout this thesis, I combine feminist criticism mostly inspired by Foley with Revermann’s performance theory and with the recently developed interest in multisensorial aspects of ancient Greek and Roman literature.[2] Building off the work of structural and cultural anthropologists, some have seen Aristophanic plays through the equation “female is to male as nature is to culture,”[3] which implies that they are distinct categories with no overlap. Foley claims, conversely, that this equation does not show an appropriate relationship with Greek culture and cannot fully represent reality. She claims that the dynamic is between oikos and polis, female and male, nature and culture, and that this is a reciprocal relationship, that functions both individually and collectively.[4] By showing how these dichotomies work together, Foley provides the framework for understanding the connection between the senses and the sexes, which will be a key point of my analysis of the Thesmophoriazusae.

Performance studies is also required to understand the relationship between the senses and the sexes. Revermann asserts that the way to understand the absurdism of the comedy is to look at how it is “created, engineered, and managed” to understand its meaning within its own context.[5] By applying Revermann’s performance theory to the use of senses, I will analyze how Aristophanes repeatedly links the prologue both to the development of the plot and the characters’ interaction with the audience.

[1] Metatheatrical as defined by metadrama (metatheatre) in the Oxford Dictionary of Literary Terms (3 ed.): “Drama about drama, or any moment of self‐consciousness by which a play draws attention to its own fictional status as a theatrical pretense”.

[2] For an influential study which contributed to the development of this approach, see Butler and Purves 2013, and all the other volumes of The Senses in Antiquity series.