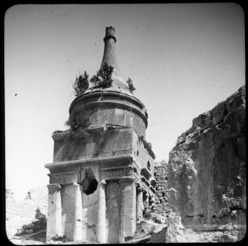 An ancient monumental rock-cut tomb with a conical roof. Although traditionally ascribed to Absalom, the rebellious son of King David of Israel (circa 1000 BCE), recent scholarship has attributed it to the 1st century CE. The tomb’s exterior design features a Doric frieze and Ionic columns, both being styles originating in ancient Greece and introduced into Judah during the Seleucid Empire, centuries after the death of Absalom. Archeologically, the so-called “Tomb Of Absalom” is a Nefesh or burial monument for the adjacent burial cave system known as the Cave of Yehoshafat.