From Plants to Pores: Selection, Design, and Optimization of Antimicrobial Peptide Scaffolds from Putative Bacteriocins 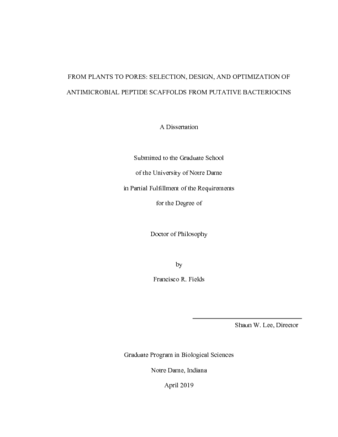 Antimicrobial resistance is an emerging threat to global health. Membrane active antimicrobial peptides (AMPs) are linear, alpha-helical, cationic, amphipathic, peptides that defend the host against infection and are an attractive alternative to traditional antibiotics for the treatment of resistant organisms. Traditionally, antimicrobial peptides are designed from naturally occurring eukaryotic peptides. Therefore, the antimicrobial peptides of bacteria, the bacteriocins, represent an underutilized source for the development of linear, membrane-active antimicrobial peptides. First discovered as a seed endophyte commensal of Vigna radiata, Bacillus safensis was shown to have antimicrobial activity against multiple plant pathogens. Genomic analysis of B. safensis revealed the presence of multiple AMP genes, including one for a circular AS-48-like bacteriocin. Using this bacteriocin, named safencin AS-48, as a scaffold we designed a library of linear peptides to evaluate the potential of using bacteriocins for the design of linear synthetic AMPs. The library parent peptide, coined syn-safencin, was discovered to be an alpha-helical membrane targeting AMP with preferential antimicrobial activity towards Gram-negative plant pathogens with minimal mammalian cell cytotoxicity. Upon optimization and screening of 96 library variants, we discovered nine optimized syn-safencin variants with antimicrobial activity against clinically relevant human pathogens and minimal cytotoxicity to human cells.

Our most active variant, syn-safencin 96, contained two Glycine (G) to Tryptophan (W) substitutions that altered the secondary structure of the original peptide and its overall activity. In order to obtain a more detailed understanding of the relationship between the secondary structure of a given antimicrobial peptide and its mechanism of action, a series of peptide candidates with step-wise substitutions from the original syn-safencin library were selected for further study using biophysical approaches. Only peptides with a specific G to W substitution dramatically disrupted Gram-negative bacterial membranes, suggesting that our synthetic peptides exert antimicrobial activity through pore formation. Patch clamp analysis on model Gram-negative membranes showed that the ability of the peptide to form a discreet pore was dependent upon the position of the W replacement in the amino acid sequence. Further investigation of this change in mechanism of action revealed that W-containing syn-safencin variants were capable of synergizing, in both biological and biophysical assays, with their G-containing counterparts, indicating that selective amino acid substitutions in minimal bacteriocin peptides can enhance antimicrobial activity by fundamentally altering their interactions with the bacterial membrane.

Since syn-safencin could be used to approximate the activity of the natural safencin AS-48, we hypothesized that putative membrane targeting bacteriocins could be validated by selecting for and chemically synthesizing minimal peptides corresponding to their membrane interacting regions. Using a set of 646 putative bacteriocins, 28,895 20-mer peptides were generated and scored by a simple script for the biophysical parameters of charge, helicity, and hydrophobic moment. Sixteen of these peptides, representing a range of scores, were chemically synthesized and evaluated for their antimicrobial activity. In general, as the biophysical scores of the peptides decreased so did their potency. Peptides scoring high in the three parameters exhibited potent antimicrobial activity. Our studies show that bacteriocins provide a rich, untapped source of synthetic AMP scaffolds. These scaffolds can be successfully optimized using selective amino acid substitution approaches to tune their mechanism of action. Our approach to discovering and optimizing bacteriocin-derived peptide scaffolds provides an innovative platform for the design of novel antibiotic alternatives to combat the antimicrobial resistance crisis.