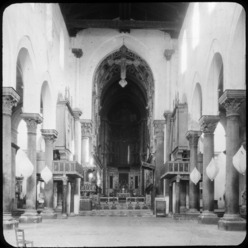 While parts of the building are barrel vaulted and parts have an open timber roof, the presbytery has a ribbed vault of stone. The white marble and pink granite columns of the main nave are spolia from the 2nd century.

The church, dedicated to the Saviour and SS Peter and Paul, was founded by Roger II in 1129 in fulfilment of a vow. An inscription once set in the wall behind the main altar recorded that the church was completed between 1131 and 1148. The building was consecrated on 10 April 1267. The discrepancies in height between the nave and choir and the ambiguous documentary evidence have led to much controversy over the dating of the various parts of the cathedral. The church has three apses, an arrangement also seen in Sicily at Monreale Cathedral. It has an aisled, basilican nave of seven bays with a pointed arcade resting on columns.