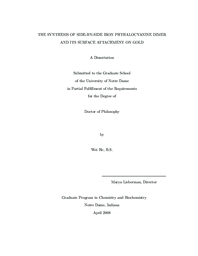 The QCA project is one of the approaches to decrease the size scale of computing devices. When molecules are used as QCA cells, they my be able to perform computing at room temperature. My Ph.D. work is focused on synthesis of a molecular QCA cell candidate, side-by-side iron phthalocyanine dimer (3a) and an investigation of its attachment on Au. We successfully synthesized two new compounds, the pentyloxy substituted side-by-side iron phthalocyanine dimer (3a) and the iron phthalocyanine monomer (1a). Two synthesis approaches, ring-expansion and statistical, were used, but only the latter one succeeded. GPC and HPLC were used to obtain high purity products (98% and 99%, respectively). The pure compound were characterized by mass spectrometry, NMR, UV-vis and electrochemistry in solution.

We found that pyridine changes the aggregation state of both 1a and 3a in dichloromethane, which affects their NMR, UV-vis and electrochemistry. Both 1a and 3a aggregate in solution, which makes their spectra ill-resolved. The NMR spectra of both compounds became simplified and well-resolved after the addition of pyridine-d5. This is because pyridine coordinates to the axial positions of the iron atoms and forms monomeric pc’s in solution. The UV-vis spectra of both compounds showed distinctive Q bands in the presence of pyridine. The electrochemistry data of both compounds also became resolvable after the coordination of pyridine. The electrochemistry data indicates the loss of pyridine ligands from the oxidized products of both 1a and 3a. From our electrochemical data we calculated The comproportionation constants of 3a; these values are large enough that the oxidized and reduced mixed-valence complexes are fairly stable. Since QCA requires formation of a mixed-valence state, this is an important finding.

The attachment of phthalocyanines (1a and 3a) on gold was investigated by STM and XPS. First we studied the interaction between the phthalocyanines and bare Au. We used ambient STM to image dropcast 1a and 3a on Au/mica. Submolecular resolution was achieved for 3a on Au/mica. The weak interaction between the pc molecules and Au resulted in the poor resolution and high mobility in STM images. We observed a decrease of the mobility of 3a molecule at low temperature, and its oval shape was observed at 77 K under UHV.